While May is indeed National Mental Health month, I'm... behind. I'm choosing to ignore that and the fact that Sarah did the actual review of this book weeks ago. Part of good mental health is accepting our... limitations.

This book is actually a 'twofer' for things I don't see often in MG lit: one, it's an American narrative memoir, and two, it's a graphic novel which has a clear depiction of a mental health issue, in this case, anxiety. This is an occasional series which proposes to study elements of children and young adult fiction from a writer's perspective.

Shannon and Adrienne have been best friends ever since they were little. But, on day, Adrienne starts hanging out with Jen, the most popular girl in class, and the leader of a circle of friends called The Group. Everyone in it wants to be Jen's #1, and some girls would do anything to stay on top... even if it means bullying the others.

Now every day is like a roller coaster for Shannon. Will she and Adrienne stay friends? Can she stand up for herself? And is she in The Group - or out?

There's been a lot of praise for this books already, so I'll spare you my recap of the storyline - and how much I cried reading it. (Plus, Sarah already did that. Not the crying, the recap.) Instead, I want to focus on genre. 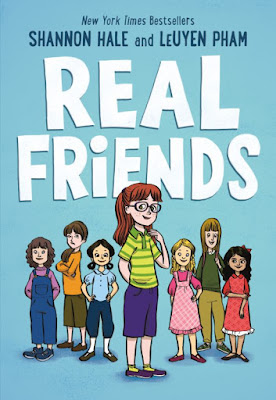 Memoir can be tricky. In this day and age, we're all amateur memoirists, constantly Instagramming and Pintersting our lives into scrapbooks of who we are, and what we did and what we wanted in our life and times. When a writer doesn't have a historical incident or a larger-than-life world to outline, memoir can seem self-involved and narcissistic. At least, that's how the New York Times criticizes most memoirists. However, memoir is actually a really good way to write for middle grade readers. It's a fun way to come to grips with the talking points of history, and I know that I read a metric TON of memoir in elementary school, as "acceptable" reading in the eyes of my parents. Told generally in the first person, memoir is truthful, without being totally factual. It takes giant bites of history and masticates them into digestible slivers, often taking readers back to a child's-eye-view of incidents, including historical incidents. The fact that memoir is more about episodes in someone's life than the day-to-day details of it make it good for younger readers as well, to read an episode, and set the book aside and think about it, or react to it. There are plenty of middle grade memoir books, but very few of them are quite so painfully personal, wherein the failures of parents, teachers, family, and friends are so clearly displayed. Rather than that casting shadow on the main character, however, or making her the most important character, it sheds life on how other people are living within the moment the main character feels is of utmost importance. More importantly, it turns the question around to the reader: Has this ever happened to you? What would YOU do? These are relatable questions, especially to younger folk.

As I've mentioned, memoir for me meant capital-H-history. It does seem like most of the memoir I've read for middle graders is from both the past, and is international. I've read books about growing up with rice paddies, the Communist Revolution, and the Holocaust. American memoir hasn't had too many huge historical incidents to grapple with in the past seventy years (although I distinctly remember reading We Were There books about the Normandy invasion in the fifth grade). Hale's book is rare in that it's recent history - just a slice-of-life from 1980's Utah. No big historical incidents happened there during that time: just life in elementary and middle school.

And, especially because both the writing and illustrations are brilliant? That's enough.

That's enough to let a kid know that their life has historical context. That's enough to remind them that "now" is not all there is, that someday, they will be 'looking back.'

The best memoir holds, once again, two ideas in tension. One, that life is a big-picture forest, and two, that this one, tiny ant is toiling along through this forest, trying to hang onto its load and keep in line behind its fellows. This keeps the characterization vivid. While this is both a story about one version of ant-Shannon growing up with anxiety and loneliness, it is also a story about the forest of imagination, and how ant-Shannon's lonesomeness was both cause and fuel for her imagination. Would she have had one without the other?

It's something to consider, while you're, as Dame Yolen puts it, telling your true.

Kelly Jensen put together a list of YA/MG non-fiction titles during the Cybils last year, of excellent narrative non-fiction. There's more great memoir out there, writers and readers.


I received my copy of this book courtesy of the public library. You can find REAL FRIENDS by Shannon Hale & LeUyen Pham at an online e-tailer, or at a real life, independent bookstore near you!