I review this book with mixed emotions. It touches on an important piece of history, using fictional characters to give eyewitness accounts to a fictional and nonfictional events. In many ways, it is successful; its Kirkus and Booklist stars attest to this. The voice is strong and the action riveting. In other ways, though well-intentioned, the subtext is nonetheless problematic. I've tried to avoid major spoilers, but... reader beware.

Summary:The newspaper account of the CORE (Congress of Racial Equality) ride in May 3, 1961 in The Montgomery Advertiser starts the book in such a way that readers who know a little history can't help but know what they're in for -- another Civil Rights story. This version is told from the point of view of an Alabama girl named Billie Simms, white, well-to-do, and on the cusp of womanhood; thirteen and imagining flying up past the stifling atmosphere of small-town Anniston, and seeing the world. Maybe she'll go to New York City. Maybe she'll go to space. Either way, she longs to take part in the larger world in a real way. History, however, is coming to Anniston, Alabama. Her neighbor, Grant, who always has his camera up to his face, is there to record it, while Mr. Grant is at the newspaper, writing it all down. May of 1961 is a year of changes and challenges, a year that Billie wakes up and realizes that the whole world isn't like her... it's a year she will never forget.

They were just watching. It seemed harmless, but I can see now that it was a weapon. Watching can hurt. It can be painful, even if you don't lift a finger. It has weight. I felt it now, heavy against me, pushing us back, enforcing the rules. I had used it myself without even knowing it.

The passengers watched. The little girl played. The bus rode on, bound for Birmingham.
- NIGHT ON FIRE, by Ronald Kidd, from an Advanced Reader's Copy

Peaks: This is one of the nicest covers I've seen in the past little while; I'm a big fan of silhouettes, and the stylized broken glass around the edges and fire and the bell in the middle are all drawn nicely from the text. It's ironic that such a terrible night made such a gorgeous cover.

The storytelling here is vivid, and Billie's voice is very clear, as she grapples with her blind acceptance of her world as it appears, and her slow realization that All Is Not Well With Everyone. Readers will be curious about her world and intrigued by the historical circumstances surrounding this ordinary girl from a small town. Billie is a go-getter, adventurous and headstrong, and though the reasons for her journey seem more happenstance than reasoned and heartfelt, many readers will travel happily with her.

One of my favorite parts of the story was the inclusion of Janie Forsyth McKinney, the twelve-year-old girl who in real life carried water to the victims of a firebombed bus, and defied her Klansman town (which later declared her mentally incompetent, though the story doesn't get into this). I wished very much that she had made more than a cameo appearance; how she became who she is would to me have been a deeply fascinating tale, one I think any kid would have wanted to read. How does one get that kind of courage? And, where can we all get some? 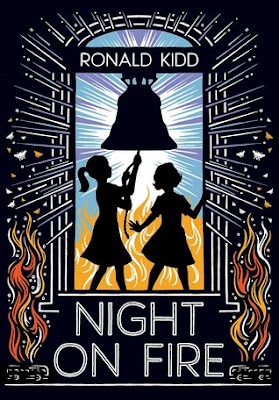 All of them had baskets. It was a way of traveling I'd never noticed or thought about - proud, self-contained, able to take care of yourself. Just add wheels. Oh, and a seat, preferably up front. The view is better. The door is closer. The bumps aren't as bad.

Valleys: This is a tightly written narrative with a strong voice but also a very strong narrative presence. In some instances, it feels as if the author is speaking for the characters, and some of their conclusions seem unusually mature and more thought out than their interaction in the text supports. For instance, Billie is brave enough to join the Freedom Riders, yet has no deep realizations about equality, though her epiphanies about the family maid, Lavender being more than her job seem genuine enough once she meets Lavender's daughter. Still, she asks no pertinent questions such as, "If the Colored folk get their way, what will change in my world?" Because people are inherently selfish, for this perky, plucky little miss to throw in her lot behind her single African American friend (not counting the maid, who is not her friend although she is confused on this issue) and follow the Freedom Riders, who were nearly burned to death in front of her, bleeding and beaten -- rang a little false for me.

The character frequently talks about her uncomfortable feelings, but they're largely glossed over in favor of action. Equally, the mixed reactions of African Americans at this time are also blended into homogeneity. It is a fact that not everyone thought the Freedom Rides should continue, especially because the riders were young and in serious danger. Many folk wanted to "go along to get along," and not make waves with the white people, but the author has created in this book an entire state full of strong civil rights supporters, which is improbable at best, as individual people of color, even within a single state, hardly constitute an African American monolith. It is implied that their pursuit of civil rights, as depicted in their positioning in the front or back of the bus, can be boiled down to "better view" and "not as many bumps." This is as disingenuous as a book I read as a child which described Rosa Parks as not giving up her seat to begin the Montgomery Bus Boycott because she was tired.

At one point, a gentle African American man on the bus to Montgomery explains that the security guard who harasses Billie and Jarmaine is "caught in a vise - heart on one side, rules on the other." Billie somehow immediately knows that her father, whose casual unkindness to Lavender has already drawn the reader's notice, and whose bystander participating in the Anniston bus firebombing shocked Billie to her core - her father obviously must just have this vise on his heart, so he's excused from being part of a mob attempting to kill people...? That and other moments of egregious oversimplification gave me pause. Although I understand wanting to let young readers feel at ease with the subject matter, the inherent unfairness of the laws reflected in Alabama in 1961 can't be understated. Yes, this is an uncomfortable subject; I believe we must let readers feel a little discomfort so that they can learn empathy. Especially since middle graders aren't babies and can understand unfairness perfectly, the depth of the wounds inflicted by one segment of the American population on another should not be muted for the sake of not upsetting anyone. As a reader hoping for a deeper look at the civil rights movement from the other side of the fence, I was really disappointed.

Conclusion:As writers, we sometimes try to put readers into the moment and our modern sensibilities - what we "should" think instead of what people truly did think back then, and what the law and social mores supported in the past - inform us so strongly that they can't let them go. Especially in books intended for middle grade readers writers seem strongly led to teach and shape opinion and sometimes this interferes with the text. In this case, a hesitance to get into the ugliness of the history doesn't detract entirely from Billie's story, and most tweens and middle graders will not notice - but adults reading this with students should take a moment and talk about some of the deeper issues of being an ally for an underrepresented group, and how important it is who gets to tell the stories of that group.


I received my copy of this book courtesy of the publisher, Albert Whitman & Company. You can find NIGHT ON FIRE by Ronald Kidd at an online e-tailer, or at a real life, independent bookstore near you!

Posted by tanita✿davis at 8:05 AM
Labels: Bullying, Class and Identity in YA literature, Historical Fiction, Middle Grade, TSD Review

I did like the descriptions of very specific events, but I would have far preferred that this be from the point of view of Jarmaine or Lavender! All too common. Why never from the point of view of African American young men? Much more interesting as well as informative. Book that needs to be written-- the bus issues in Cleveland in the 1970s! I would love to know more about that!

@Ms. Yingling: Thanks... And one thing this book DID do for me is encourage further research into Janie Forsyth McKinney, so was glad to read it.