Honestly? I did not see this one coming.

Some of us in the kidlitosphere who have grown up in a faith have frequently bemoaned the scarcity of accurately, positively and creatively depicted faith in children's fiction. (Please note I said "faith" and not "Christianity.") I had just had a conversation with a fellow blogger about this very thing when I was approached by a small press to review their book. For some reason, I thought this was a poetic book, but soon discovered it's not quite poetry, nor, despite the artwork, is it quite a graphic novel. It's a cross between a parable and a history, an earnestly told folk tale and a really, really long pun. In the weird tradition of Jonathan Swift, Lewis Carroll and Frank L. Baum, we have... The Exodus. With Cats. It's ...amazing, actually.

The Cat Code of Conduct

A cat must be loyal to family
And do his best to keep folk free
A cat my kill spiders, mice and rats
But never, ever other cats
A cat shouldn't steal, curse or lie
Or poke his neighbor in the eye
A cat should take care not to bite
The hand that feeds, and not to fight
To do good deeds with all his might
And champion what's fair and right
Above all else, a cat must see
It's best to live in harmony
With creatures both alike and not
In form, in fact, in heart, in thought.

Summary: Wu Zhua - whose name means Five Claw - saved her people from the Monkey Dynasty, where they had been slaves for so long. But, what happens after freedom? Mostly a lot of complaining, aimlessness, and confusion. Kittens were growing up without any knowledge of Kung Fu, or the years in service to the monkeys, and without any gratitude or understanding of what their ancestors had gone through - or of what the Water God Zhi Shui Zhi Shen had done for them. Now President of Catland, Wu Zhua worries that the newly formed society she longed for is hollow and doomed to fail. 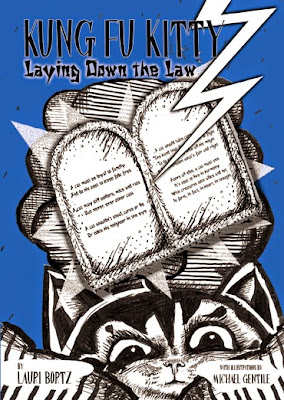 Every good leader takes help from all sources. For Wu Zhua, this involved a pilgrimage to the Milky Way where The Water God showed her that help was available from a tribe of cats who had freed themselves long before the Catlanders, and had come up with the Cat Code of Conduct. Convinced that these cats were a vital part of her people's history and could save their future, Wu Zhua returns to Catland to prepare her kin the eventual reunion between the Wavians and the Catlanders, bringing back a silk scroll with the Wavian cats' Code written down. Sadly, their President returns to find Catland in disarray. Her people had changed the society she had formed, done away with the reminders of the past she had left them, and come up with their own world. Wu Zhua, stung by their neglect, decides that she, too, can give up on her people. But the Water God has other plans, which include a giant carp, a Phoenix, and some lovely jade eggs...

Peaks: This is one of the quirkiest, most original and fresh retellings of the Exodus I've ever read. Using Chinese-style mythology, with its myriad gods and sometimes obscure logic, the story reveals new insights to an old story. It's unexpected, on a number of levels, occasionally funny, and largely sticks to the original Biblical tale in Exodus... with the brilliant addition of cats.

Valleys: In such a short, short book (only 72 pages) there is SO MUCH story that it's information-saturated and super-packed. Readers have to pay attention, or they can be overwhelmed and overloaded - or irretrievably lost. For me, the book could have used a bit more of a linear plot and reshuffling to organize bits of the story which, while interesting or punny, didn't necessarily lend themselves to a clear narrative.

Conclusion: For readers who like history, mythology, and the odd pun, this short and creative retelling of the Exodus is packed full of quirk and character, and will produce an enjoyable, if slightly surreal, treat over coffee.


I received my copy of this book courtesy of Abaton Book Company. You can find KUNG FU KITTY, Laying Down the Law by Lauri Bortz at an online e-tailer, or at a real life, independent bookstore near you!