Awhile back we met Hazel and Daisy in Murder Most Unladylike - or, in clunky American titling, MURDER IS BAD MANNERS (I have a horrible suspicion that ARSENIC FOR TEA will be marketed to Americans as POISON FOR LUNCH or another equally pedestrian title. Argh). In that review, I spent a lot of time gushing on the books homage to the brilliance of Agatha Christie and others from the Golden Age of British Mysteries. I really think Robin Stevens, as a California-born British transplant, is the perfect voice for this series, as she's looking into a not just closed but hermetically sealed society as an outsider - she can be living in England for sixty years and still be considered "the new American visitor." (Whereas Americans seem to be pretty convinced that everyone wants some of our supreme wonderfulness, and assume everyone wants to come here to stay, the British are fairly certain you'd appreciate returning to your own country, thanks all the same.) Her dry observations and the repeated phrase, "I will never understand the English" make Hazel's voice ring all too true.

This is a wonderful mystery with another stylish silhouetted cover which will have its readers immediately thinking of the game Clue! More brilliantly, it is a stand alone - so no worries if you haven't yet read the first - and reads like a cozy mystery without the old ladies. From the moment the butler opens the heavy front doors, the game is afoot, so line up your cards, Cluesters, and let's play. A guest falls ill ...in the dining room, but unlike in Clue, there's motive to consider when locating the murderer: it could be the butler, the maids, the Lord, the Lady, the Aunt, the Uncle, or the governess... But... why? 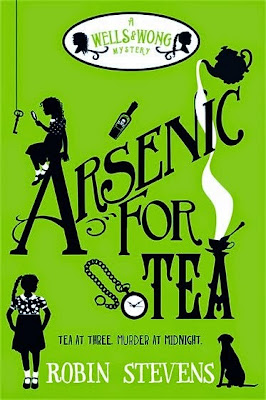 Summary: Fallingford is the Wells family home, a gigantic pile of warmly golden stone where Daisy has once again invited Hazel for their term break - and to celebrate Daisy's fourteenth birthday. Nascent Anglophile Hazel continues to be fairly charmed by the very Englishness of the English country house, where priceless antiques and jewels are simply tossed around with the insouciant dismissive attitude of hereditary wealth. And yet, despite the perfectly correct servants (although her family has far more, in Hong Kong), the frumpy-but-intelligent governess, and the labyrinthine country estate reveal things are not at all Pemberly Hall almost immediately - Lady Hastings is snippish and glacial this time, and Lord Hastings, disorganized, bluff and hearty - is worse than usual. There is NOTHING worse than being a kid visiting another kid's home while there are parents fighting... nothing worse, and haven't we all been there? It's very relatable. Lord Hastings is clearly in the doghouse with his lady-wife for something, and keeps sending Lady Hastings flowers... which she heartlessly consigns to the kitchen maids. Even Bertie, Daisy's grumpy older brother and his best mate from Eton, Stephen, can tell: things are NOT okay, and not apt to be okay anytime soon.

And then the party guests begin to arrive on the heels of a storm - Kitty and Beanie from Deepdean School, the sticky-fingered and secretive Aunt Saskia, Daisy's monocled Uncle Felix, and a totally unexpected guest: the unctuous and smooth Denis Curtis, with his brilliantined hair and natty suit. Suddenly Lady Hastings warms up a great deal more than expected - far warmer than anyone married should be toward someone not her husband. Hazel and Stephen, understanding far sooner than the rest of the young guests, really just wish they could go home...back to their schools...anywhere not in the line of fire - and fire there will be.

Despite manners and reputation, things are already in a wobbly state by Daisy's party. When Mr. Curtis has a terrible spell right in the middle of things, suspicion runs rampant. Will everyone become ill? What was in the birthday cake? As the storm continues to rage and the roads wash out, Hazel is stuck in the house with the smug Kitty, the hysterical Beanie, and Daisy at her absolute bossiest and wild-eyed President-of-the-Detective-Society worst. Oh, and the murderer and the body, too. Not even the police can come out, so it's up to Hazel and Daisy to save the day. It's time to use the dollhouse to reenact the murder, and get to the bottom of this -- regardless of Daisy's utter inability to see that her family are the prime suspects.

Hong Kong is looking better to poor Hazel all the time.

Peaks: The tension begins on the first page of the novel and climbs steeply and precipitously. The twists and turns keep the reader hopping; many are the guesses and assumptions and rosy herrings, but many readers will be surprised at the denouement - and truly torn about how they should feel. The stakes are seriously high - and real - this is not soft-soaped because the book is marketed to middle graders. Readers will have to read and then think about ethics - which is just wonderful.

Hazel and Daisy's difficult relationship, complete with bad behavior on Daisy's part, and too much acceptance on Hazel's, continues to be ragged... and then, very realistically, unravels completely. Hazel describes it as feeling a button ping off and a constricting garment losening - realizing she cannot let Daisy's wrongheadedness ruin the investigation - and the relief of speaking up - which is indeed short-lived. Hazel gets her hair blown back as Daisy erupts and ends their friendship. But, I like that this isn't the true end, despite how huge the moment feels. I also like that there are hints of the direction in which the third book will go - Hazel will get her own back and be the star of the show - well, if her father gives her any breathing room. But, that's for next time...

Valleys: There is dubious adult behavior in these books - yes, quelle obvious, there's a murder, but if you're a part of the Behavior Police, you may feel that some of the adult behavior is something that shouldn't be in a children's book - though, in that case, reading murder mysteries is a strange choice. This is not a valley for me, but fair warning, all right? Oh, and those of you who aren't fond of end-of-the-book glossaries may find a moment of annoyance, but those are put there probably largely for American readers, and they go along with the clues-in-a-notebook thing Hazel does, so they work okay for me.

Conclusion: A fast-paced, tautly arresting and absolutely brilliant stand-alone sequel to the first Wells & Wong mystery, ARSENIC FOR TEA shines. I am absolutely looking forward to the next and the next - reading these books is like anticipating the flavor of a spectacular bittersweet salted caramel, eaten one at a time. I want to start over and read them both again.


I purchased my copy of this book from The Book Depository, which is a lovely company that will send you books published abroad with no problem. You can wait for the inevitable American version or find ARSENIC FOR TEA by Robin Stevens at an online e-tailer.

The first one was VERY enjoyable! I look forward to this sequel when it's available stateside (or I might check the Book Depository--Rob has gotten a lot of great used academic books from them).