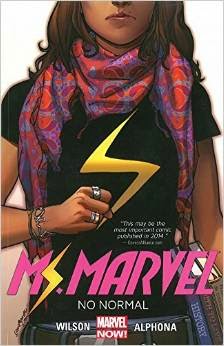 Summary: I was excited, intrigued, and a little wary when I heard that the new reboot of Ms. Marvel was going to be a Pakistani-American, Muslim teenage girl. I cheered because young women of South Asian descent would finally be represented in the pages of a mainstream comic book, and while I have never been a huge fan of the Marvel universe (I generally prefer DC, Vertigo, and indies) or superhero comics (I tend to prefer antiheroes), there's no WRONG venue for the world of comics to reflect our diverse world.

At the same time, I worried: would the representation be excessively stereotypical? Would it be inaccurate? Would it have a hidden agenda? Would it fail miserably to appeal to its desired audience for one reason or another, bad luck or bad marketing or whatever, thereby causing gender, ethnic and religious diversity in comics to suffer a setback? Would it be too preachy or too message-y?

After reading the graphic novelization of the first several issues of Ms. Marvel: No Normal, I'm…well, I'm pleasantly surprised. Yes, there are a few stereotypes, but character types are to be expected in a superhero comic. I mean, it's a superhero comic. There is diversity, and plenty of it--not simply because the main character, Kamala Khan, is Pakistani-American and Muslim, but there is diversity depicted in the variety of beliefs and practices within Islam: Kamala's brother is so devout it drives everyone a little nuts, her best friend Nakia is Turkish and chooses to wear the hijab—against her parents' wishes, and Kamala herself is trying to find a middle road, wanting to do "regular American" teenage things while still loving and respecting her parents, who are strict and want to keep her safe. She's always been a superhero fangirl, and looked up to Ms. Marvel as a strong female role model…and then she ends up with some superpowers of her own. Then things really get complicated.

Peaks: I like it that there are nuances to Kamala's relationship with her family and friends. This isn't just the story of a poor beleaguered Asian-American girl with overly strict parents who can never go out or talk to boys. In fact, one of her best friends is a boy, Bruno, and her parents seem to be just fine with him. Her parents, while strict by American standards, love Kamala and try their best to explain their point of view rather than simply being portrayed as tyrants. As I've already mentioned, the variety and diversity of characters is a positive thing, and the colorful environment of Jersey City is nicely shown in the artwork that provides a backdrop for the story. And, overall, I just think it's a fun, fresh take on the old-school superhero comic. Kamala is a relatable teenage girl, and there's a strong subtext of empowerment (both symbolic and literal) throughout the story.

Valleys: For me, I suspect the valleys here are things that would bug me about most superhero comics: moments of ridiculous dialogue and characters who are exaggerated for comic effect. At least the exaggeration and ridiculousness seems even-handed and no one group (or ethnicity) is targeted more than the others, as far as I could tell. If you don't like superhero comics to begin with, this one probably isn't going to offer you TOO much that breaks the genre mold.

Conclusion: This was fun. I will probably pick up the next installment just to see how Kamala copes with her new powers and new identity—another thing I did think was done well here was her struggle for how to view herself, and how to make something new of herself that wasn't done before by the previous Ms. Marvel. I was prepared to be annoyed that her superpowers, at first, came with a righteous head of blonde hair, but instead, Kamala goes on to reject the classic image of Ms. Marvel and redefine what it means to be all-American, reminding us all that there is no single, all-encompassing definition for it.

I received my copy of this book courtesy of my friend Ross, who loaned it to me. You can find Ms. Marvel Vol. 1: No Normal at an online e-tailer, or at a real life, independent bookstore near you!
Posted by Sarah Stevenson at 8:00 AM
Labels: Adventure, AF, Comix, Diversity, Fantasy/Sci-Fi, Graphic Novels, Multicultural Fiction, Reviews