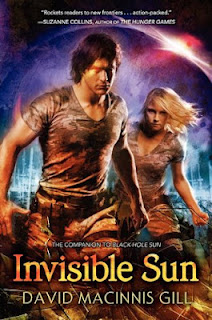 Reader Gut Reaction: Invisible Sun is the sequel to David Macinnis Gill's equally-musically-named Black Hole Sun. It continues Durango's adventures on Mars in appropriately action-packed fashion, with plenty of snappy dialogue to boot. It's got the feel of classic pulp sci-fi and has plenty of fun tropes that sci-fi fans will enjoy, from Mimi the Smart-Mouthed AI Implant to Archibald the Fatally Egotistical Supervillain. I also enjoyed the fact that the story takes place on a sort of dystopian version of Mars, long after terraforming and settlement have taken place. There's a little bit of Mad Max feel, with all the tearing around dusty roads in various vehicles, but there's also a bit of the kung-fu action movie in this one, too, with some of the action taking place at a remote Mars monastery.

Durango and his companion Vienne are ex-super-soldiers and current mercenaries, though, so they're loaded with all sorts of fun tech. The author does a good job of using technology to add atmosphere to the story without being so detailed that it's distracting. Above all, this is a fast-paced and fun read—perfect for summer.

Concerning Character: In this book we are treated to further tantalizing hints and revelations about Durango's identity—we've already found out he's the disgraced son of the former Zealand Corporation CEO, but what does that really mean in a world where the corporations are hunted at every turn by mercenaries and rebel groups? If Durango can just steal the right data and crunch the numbers, maybe he'll find out.

In the process, Durango is just trying to stay alive—self-preservation is a clear motive for him—but he's also got his faithful soldier and fellow mercenary Vienne to think about, and in many ways this book is about Vienne, too. We find out a lot more about her past, growing up in a remote Tengu monastery. Durango's emotional side is fleshed out a bit here, also, as we see the flowering of romance between the two battle-hardened soldiers in the relative peace of the hidden monastery. But when an imperfectly planned rescue attempt goes wrong, Vienne is caught up in it and Durango blames himself. Don't let the snappy dialogue fool you—there's plenty of depth to the characters in this one, whether it's the ass-kicking Vienne, troubled Durango, or mischievous little sister Riki-Tiki.

Themes & Things: There's a lot more romance in this one than I remember there being in the first book—possibly because the infatuation that went seemingly unrequited in Black Hole Sun is now reciprocated. However, the growing emotions between Durango and Vienne are frustrated at every turn by external events, from meddling families to unplanned disasters, keeping the reader on tenterhooks about whether they'll ever really get to be a couple. The other major theme in these books is Durango's search for identity. Of course, as he tries to figure out who he is and what secrets lie in his past, his journey itself is forging his true character.

Cover Chatter: I'm sorry, but this cover just does not do the book justice. My honest opinion is that it is kind of cheesy, and the figures look like they should be on a romance novel. It's hard for me to see guys drawn in on the basis of the cover alone. However, they should ignore it because I think this is a great book for male AND female readers. Maybe if there were less emphasis on the figures (if they were smaller, maybe?) and more on the backdrop and the broken glass motif, it would work better for me.

You can find Invisible Sun by David Macinnis Gill online, or at an independent bookstore near you!
Posted by Sarah Stevenson at 8:00 AM
Labels: Adventure, AF, Fantasy/Sci-Fi, Guy Appeal, Reviews