If you have an interest in YA/MG historical fiction, you might remember our Summer Blog Blast Tour interview with Nancy Bo Flood, author of Warriors in the Crossfire. She was kind enough to answer our questions about her wonderfully detailed, touching, and informative novel that followed the lives of two young men on the island of Saipan during World War II. 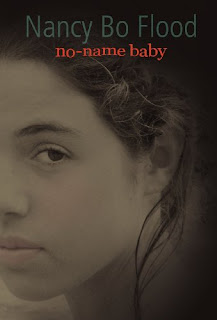 We enjoyed Warriors in the Crossfire--as a story as well as an account of history--so we were excited to hear that Ms. Flood has a new novel, also out from Namelos Editions: No-Name Baby, which Kirkus Reviews called "an agreeable, ultimately optimistic tale of the strength of the human spirit." Though I'd definitely classify this one as a quiet read, intense emotions run just under the surface in the story of Sophie, a 14-year-old girl who is confronted with one family trauma after another in the hardscrabble years after World War I.

As I read, it was clear that Sophie was, in many ways, trapped in her life--things happen TO her and around her, but she isn't able to affect her world or even to conceive of having the power to do so. From time to time, I found myself frustrated on her behalf, and even frustrated with her, wanting her to assert herself more. However, surrounded as she is by closemouthed adults who still see her as a child in many ways, Sophie's story is sure to evoke sympathetic feelings in teen readers, and appeal to those who enjoy historical fiction that portrays day-to-day life in vivid detail.

A quick postscript--don't forget to check out the newly launched website for Namelos, which is devoted entirely to publishing YA books and has a wide lineup of new authors and books in a wide range of genres, including many multicultural titles. It's also got a great design, reminiscent of Pinterest with a bulletin-board feel.

You can find No-Name Baby by Nancy Bo Flood at an independent bookstore near you!
Posted by Sarah Stevenson at 1:33 PM
Labels: AF, Historical Fiction, Realistic Fiction, Reviews

I'm intrigued by the number of ebook-only small presses which have opened up; will be interested to see which direction namelos goes...

Tanita, namelos actually publishes its books in hard cover and paperback as well as all the e-book formats. However, the print copies are print-on-demand.

Thanks for this review. NO NAME BABY gives readers a vivid trip back in time. It tells a "small" story of one young girl's family but provides a broad sense of that time period. I think both adult and teen readers who're looking for books to engage their deep emotions will appreciate this book.

In my experience, the best place to get namelos titles is on-line, but if you have an independent bookstore that carries or orders outside the box, great!

@ Carol - I read that AFTER I commented. Thanks for the correction.

@ Sheila - Yes, we try and support indie bookstores, but online DOES work really well, in this case!

I loved the Italian grandmother in this book and the Italian phrases sprinkled throughout. They really gave the book a unique flavor!