TURNING PAGES: The Girl in the Steel Corset

This book came out May 31st, and has received a lot of press already. Normally, I prefer to review books with a diverse cast, but steampunk as a genre is always deliciously tempting, so I made an exception for Kady Cross' The Girl in the Steel Corset.

Reader Gut Reaction:When Finley Jayne is set upon by the son of the house where she is a lady's maid, I expected her to figure out a traditional way out of a jam -- for her to bribe, barter, or boo-hoo her way out of the trouble coming down, like a proper Victorian miss. I expected her to run like the wind, or some kindly butler to step in ...

I did NOT expect her to wallop Lord Felix August-Raynes upside the head and knock him out cold.

Finley Jayne kicks butt -- or, something in her does. That something inside of her, is shuddering and stretching and bubbling, trying to grow. If Finley doesn't get in control of herself, that something else will be in control... maybe permanently...

A bit predictable, but fun, The Girl in the Steel Corset uses a nifty twist on steam tech -- a nanotechnology-type of thing -- and combines it with well detailed costumes, interesting characters, and traditional adventure tale tropes.

(And while it would be hard to do much [any!?] serious adventuring in it, and the main character wouldn't ever wear it, you've gotta love that gorgeous red dress on the cover... Also, chapter pages had a nice selection of gears - great book design.)

Concerning Character: With few exceptions, this novel remains in comfortably unoriginal territory, with a great many familiar and traditional character types in place -- the wealthy young nobleman whose parents have departed this mortal plane too soon, his handsome, but troubled "common" best friend, the plucky hoyden whom neither of them quite notices is a pretty young woman, and the newcomer, Finley. They break down into the traditional heroes - The Professional, the Rogue, the Adapter (kind of McGyver on the fly), and the Fish out of Water. This team gathers essentially for the cause of one, are arcane and powerful, yet use their somewhat magical powers for good, which is reminiscent of the Harry Potter books, as well as comic books like, oh, the original X-men. It's a tried and true formula, and while it's strictly unoriginal, the light, quick premise still satisfies. 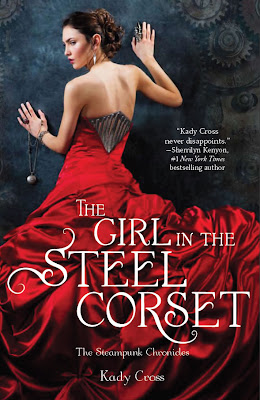 Now, to get on with the story: The young master around whom everything revolves is His Grace, the Duke of Greythorne, Griffin King, who gained his title at the age of fifteen, and whose life is only loosely supervised by his aunt. His money enables him to gather friends in need about him, and the Organites discovered by his late father -- a discovery banned by the Crown -- make the technology of the time that little bit better. At Griffin's house, all the velocycles are a bit faster, the automatons smarter, and nobody ever needs stitches, because the Organites, organic beasties which can mimic the body's own cellular composition and everything else -- are at work. The young duke can also manipulate the Aether, the substance of which everything in the non-corporeal plane is made. He can simply look into your eyes, and ...change things.

Sam is Griffin's best friend -- a faithful sidekick who, though lowborn, has had the same advantages as the young duke. Terrifying circumstances have recently shaken his faith in himself -- and everyone else -- and he even blames the Irish girl, Emily, whom he has adored for so long, for saving him with her mad steampunk engineering skillz. It is obvious to everyone that Emily adores Sam, and saves some of her best tinkering for him (except for that marvelous steel corset that she makes for Finley, which is pretty awesome in itself), but Sam is too tangled up into his pain and delusions to care. (Sam = kind of annoying)

Finley appears to be only a servant girl, but the past links her to Griff in a way that makes her appearance in his life seem anything but coincidental. Is she, as Griffin's aunt suspects, being planted in the household to hurt them? Is the "thing" inside of Finley a threat?

Dramatic voiceover: Only time (and, okay, reading the book) will tell...

Obviously, such a powerful group filled with strong, smart girls and butt-kicking, Dudley Do-Right guys, is going to have Enemies. Finley fears her old employer -- for good reason -- and a crime boss named Jack Dandy. Kind of. She's mostly afraid that he's too attractive by half. Sam fears himself -- he's his own worst enemy. Griff -- and by extension, the rest of the team, plus Queen Victoria -- fear a shadowy madman called The Machinist, who seems to have an agenda which includes, oh, taking out Griff, taking down the Crown and then moving on to world domination. You know, the usual.

There's a betrayal that's a bit disappointing -- I saw it coming a mile off, and so, probably, will you -- a death that remains unexplained -- maybe we'll figure it out in later books? -- and I had to chuckle at a couple of other incidents that I just knew would happen, but no matter the predictability, this series is atmospheric and has plenty of fun elements, and it is going to be quite well received. Like the "cozy mystery," this novel has "cozy adventure" all over it -- light and fast paced, and not too far out of a reader's comfort zone.

Recommended for Fans Of...: The Infernal Devices Trilogy, by Cassandra Clare, Catherine Webb's Horatio Lyle series, Gail Carriger's books, and others which are light on tech, heavy on dashing around and budding friendships and romance.

Authorial Asides: Kady Cross is the author of this novel... but her real name is Kathryn Smith, and she's a bestselling romance novel author. I haven't read any of her work - that I know of - but wrote a pair of YA Regency romances in 2002 for Avon Books. With nineteen novels and two anthologies under her belt, she's a busy lady.

DEAR FCC: I received a .pdf ARC of this book from publisher Harlequin TEEN, via NetGalley.

You can find THE GIRL IN THE STEEL CORSET at an independent bookstore near you!
Posted by tanita✿davis at 12:25 AM
Labels: Adventure, Reviews, Romance, Steampunk

Your review made me laugh! I'm interested in this book, because I read the prequel--THE STRANGE CASE OF FINLEY JAYNE--on my Kindle. I like a "cozy" adventure.

Ditto pretty much what you wrote -- predictable cast of characters and romantic plotline, great variation of steampunk themes, better writing than I remember from my Harlequin- reading days (30 years ago?). An awful lot of description of everyone's outfits (plus the whole corset thing) is a dead giveaway that this is firmly in the "romance" category as well as YA steampunk. Yes, I enjoyed the book.

If I had to chose an alias, I wouldn't mind "Kady Cross." Cool name.

I love the "light on tech, heavy on dashing around" description. This one does sound fun, even though I generally avoid romance novels. The nanotechnology premise is a good twist. And that dress does look awesome...