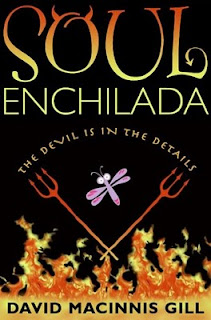 How much do I love the title Soul Enchilada? Um, a lot. David Macinnis Gill has created a hilarious Tejano-flavored tale of demons, debts, and impending destruction, with a sassy and self-sufficient mixed-race narrator to boot. (You know how much we love THAT.)

Eunice "Bug" Smoot is 18 years old and used to fending for herself since her Auntie Pearl and her granddad Papa C died. She makes her living as the best pizza delivery driver in El Paso. But when a demonic repo man named Mr. Beals shows up one day demanding the return of her Papa C's Cadillac—her livelihood--she realizes she needs a little help. Supernatural help.

Luckily for Bug, the sexy and endearingly dorky Pesto Valencia, who works at the local car wash, happens to know a little something about getting rid of demons. UNfortunately, the car of Papa C's dreams is turning out to be the contract from hell for Bug. Add in a supernatural lawyer, patronizing bureaucratic demon hunters, an oddly intelligent and protective coyote, a preternaturally gifted basketball-playing nemesis, and a vindictive pizza delivery boss, and you've got a recipe for hilarity and mayhem.

The witty, snappy dialogue and the willingness to tackle issues of race and economic status without beating the reader over the head are two major strengths of this book. The plot careens around a bit, but I was very willing to go along for the ride; in fact, the breakneck pace seemed fitting, and all the threads came together in the end. And Bug, as a character, was spot on in my opinion. She was no wimpy damsel in distress, and in fact had trouble acknowledging when she needed help and was reluctant in accepting help.

A highly entertaining read that will probably appeal to fans of A.M. Jenkins' Repossessed.

Buy Soul Enchilada from an independent bookstore near you!
Posted by Sarah Stevenson at 8:33 AM
Labels: Adventure, AF, Fantasy/Sci-Fi, Guy Appeal, Humor, Reviews

I liked Repossessed lots! Someday I will read this one....

Sounds perfect. Love the title, the cover art and the premise.
Three for three is an almost sure buy.

We had a HECKUVA time finding this for Cybils, but I'm so glad you wrote a review! It sounded awesome, and you've compared it to THE HOLY GRAIL of good books, REPOSSESSED, so I'm sure to read it now!