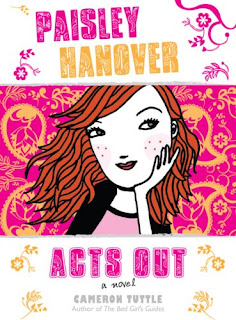 Paisley Hanover's used to being popular, but there's no way she can compete with someone like Candy Esposito--as becomes abundantly clear when they're forced to compete for the same spot on the yearbook staff and Paisley spazzes out in front of the class. As a result, she's sent over to Drama class with all the freaks, geeks, and other unpopular peons. Now, Paisley's bummed about her chances with cute, soccer-playing Eric Sobel, and ends up in a class full of people who assume she's just another stuck-up, mean popular girl.

But Paisley tries to make the best of it, and soon, she finds herself getting to know a whole new crew of friends, while her old friends, Jen, Amy and Carreyn, become increasingly obsessed with cheerleading. There's bad-boy hottie Clint Bedard, who she suspects of sending mysterious unsigned secret-admirer notes; there's the uber-mod Cate Maduro; there's tall and skinny "Bean", a childhood friend; and more. With her new group, she embarks on a quest to absolve herself of the label "Spastic Jazz Hands" and win the class presidency in the name of unpopular kids everywhere.

Paisley is an appealing and funny and very fallible narrator who reminds me of Amanda Bynes's character on the TV show What I Like About You. She's likeable, she's spazzy, and she has a good heart--but Paisley also has a sense of ambition that gets her into just a wee bit of trouble, and that's where the fun comes in. A funny, light read that brought back memories of the good, the bad, and the ugly of high school.

These comments are based on the Advance Review Copy. This book will be available in March 2009.

Bring on books set in drama class, I always say - and the comparison to Amanda's character makes it sound like a fun, breezy book.