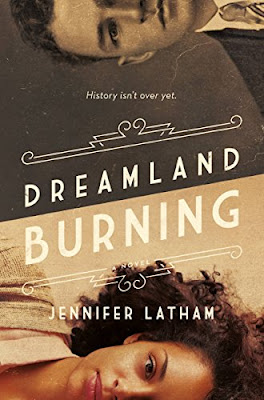 Synopsis: I haven't read Jennifer Latham's first book Scarlett Undercover, about a teen Muslim girl detective, but after reading and enjoying Dreamland Burning, I plan to look for it. Dreamland Burning is really two parallel intertwining stories, one in the past and one in the present (a device which, I'll admit, I tend to really gravitate towards).

The historical narrative in this book concerns the Tulsa Race Riots of 1921, a tragic and horrifying incident which I freely admit I hadn't really known about before in which the prosperous, bustling black side of Tulsa—Greenwood—was burned, its residents rounded up by a white mob, many of them killed. Caught up in the violence is a young man named Will Tillman, trying to figure out right and wrong in a Jim Crow world that largely teaches him black people are to be feared and resented.

In the present, the story is told by teenage mixed-race girl Rowan Chase, who lives in present-day Tulsa. When a building crew doing renovations on their guest house discovers a skeleton under the floor, Rowan launches herself into solving the mystery of the body and how it got there. In the process, she realizes the extent to which the troubled racial history of Tulsa is still an ongoing legacy—one that intertwines with her own family's history.

Observations: With alternating chapters between past and present, both in first person, this is a fast-moving page turner. The often stomach-turning realities of being a black person in the 1920s South are juxtaposed with the still-problematic experience of being mixed race in the present day, with plenty of food for thought as a result. While I thought that part of the story could have been pushed a bit more, the focus on the mystery plot kept things moving forward and probably also kept the book from being obviously didactic. In fact, there were plenty of seeds planted here for readers to think about in terms of social and racial justice, from Rowan's best friend James's tutoring English to immigrants at the library, to the uneasy facts of Rowan's own racial identity and history.

Because so much conversation has been going on about Own Voices, I feel compelled to point out that this is not (to my knowledge) an Own Voices book, but from my personal perspective, it was sensitively written and focused on characters of color and the history of people of color in this country. It's a book that received a lot of positive reviews and starred reviews, and one can only hope that doesn't occur at the cost of any equally well written and researched Own Voices narratives. If you follow our blog, you already know we try to read and review as widely as possible within our areas of interest, so in our little corner of the blogosphere I don't think we're ignoring or slighting Own Voices—in fact, it's always been a focus of ours even before there was a hashtag. So. There you go. Disclaimer-y thing over.

Conclusion: If you enjoyed Ashley Hope Perez's Out of Darkness and other gripping novels that bring to life some of our most troubling historical moments—and leave you with hope as well as the desire to change our world for the better—check this one out.

I received my copy of this book courtesy of my library's ebook collection. You can find DREAMLAND BURNING by Jennifer Latham at an online e-tailer, or at a real life, independent bookstore near you!
Posted by Sarah Stevenson at 8:00 AM
Labels: AF, Class and Identity in YA literature, Diversity, Historical Fiction, Mystery, Realistic Fiction, Reviews, Suspense

I adore that cover!
Anything that rates a comparison to an Ashley book is pretty well bumped up the TBR, too.

I love the cover, too. :) I think you'll enjoy the book. One thing I forgot to add to the review is that it doesn't reduce historical tragedy to simply good vs. bad people, but shows that there are all kinds of shades in between...people trying to do good and failing or succeeding, and people who learn and change over the course of the story.