Monday Review: OUT OF DARKNESS by Ashley Hope Pérez 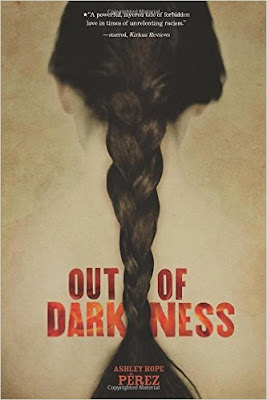 Summary: Ashley Hope Pérez's latest novel comes out on September 1. I tell you this so you can brace yourself. Out Of Darkness is historical fiction of the most wrenching kind: based on a real-life tragedy, with plenty of collective guilt to go around and no easy answers. The time and place: 1937 in New London, an oilfield town in East Texas. From Wikipedia:

The New London School explosion occurred on March 18, 1937, when a natural gas leak caused an explosion, destroying the London School of New London, Texas.... The disaster killed more than 295 students and teachers, making it the deadliest school disaster in American history.


The story is set against the backdrop of the months leading up to the disaster, but it's no tale of oblivious youth unknowingly headed toward an inevitable tragedy. New London is a difficult place to live. It's a difficult place to just BE if you're Wash Fuller, who is black, or Naomi Vargas, who is Mexican. Naomi's bringing her younger twin half-siblings to live with their white father in the hope of a better life. Certainly, Beto and Cari have an easier time of it—they look more white, and they fit in at their new school just fine. For Naomi, everything's more complicated: with teachers, with her peers, and, in a really bad way, with the twins' father, who is an on-again, off-again alcoholic who works in the oil fields. Then things get complicated in a good way for Naomi, when she meets Wash, who is smart, kind, and lives on the wrong side of town, in an era when segregation is still widespread. In a world like theirs, though, good things are often all too fleeting.

Peaks: There is so much packed into this novel. It is not only a book about racial issues, reminding us that the traumas and mistakes of our history are still resonating even today, reminding us that we still have work to do. It's also a book about class and education, and the misunderstandings and bad behavior that can result when racism and classism and differing education levels intertwine and create a complex and simmering stew of hostility. And the characters will break your heart. Without giving too much away, the reader gets multiple viewpoints on the unfolding events: Naomi and Wash are the primary characters, but we also hear from the twins, Beto and Cari, and from their father, Henry. Perhaps most surprisingly, we also receive an occasional dispatch from "The Gang"—written in first-person plural, the readers are placed as complicit in the behavior of Naomi and Wash's peer group, and yet mute, watching, we are unable to affect the inevitable slide toward tragedy.

Valleys: This novel is GRIM. I'm not going to lie. It is hard to read, and it will take your emotions to the brink of despair, and you won't be able to put it down. If you are faint of heart, be warned that there are lots of difficult, painful-to-read moments, scenes that will make you uncomfortable and themes that are thorny and risky enough to make this one more suitable for older YA audiences: racism both insidious and virulent, abuse, violence, and other morally questionable behavior by characters. The most frightening part is knowing that while the specific characters are fictional, the reality underlying this situation—the explosion itself and the social context—makes the imagined story all too believable.

Conclusion: Out of darkness, comes light…There is the faintest glimmer of hope about this one, of the possibility of making something right—and this book, in its way, is a part of that making-something-right, a part that we artists have, rather incredibly, some control over. There may be no redemption to be had, let alone a happy ending, but this book reminds us that no matter what has happened in the past, from now on, this moment right here, there is always the chance to do something good, to put good into the world. We don't have to accept being part of "The Gang" and standing aside in the face of injustice. It's a message that is newly, repeatedly, sadly relevant: to what extent are we—any of us—willing to risk ridicule, punishment, even harm, to right a wrong? To defy an unjust social directive, like Naomi and Wash? They might be uncomfortable questions to contemplate, but that doesn't make them any less important.

Stay tuned later this month for an interview wherein Tanita and I have the opportunity to ask Ashley Hope Pérez all about the inspiration for the book and her motivations for telling this particular story.

I received my copy of this book courtesy of NetGalley and the publisher; this review is based on an Advance Reading Copy. You can find OUT OF DARKNESS by Ashley Hope Pérez at an online e-tailer, or at a real life, independent bookstore near you, on September 1st!
Posted by Sarah Stevenson at 8:30 AM
Labels: AF, Class and Identity in YA literature, Diversity, Historical Fiction, Problem Novels, Realistic Fiction, Reviews, Sibling Fiction