Thursday Review: THE SPECIAL ONES by Em Bailey 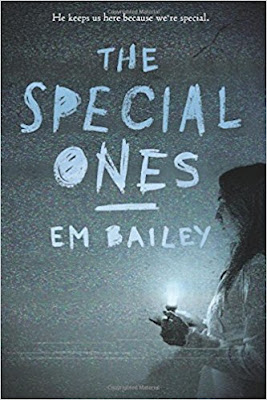 Synopsis: A few years ago I read Em Bailey's earlier novel, Shift (reviewed here), and found it to be a suspenseful page-turning thriller, so I was interested to check out her newest novel: The Special Ones. This one's also a psychological thriller, with a lot of intriguing surprises and plot twists as well as a scary, unhinged villain.

When the story starts, we are immediately plunged into the rather unusual life of narrator Esther. Esther lives in a farmhouse with a younger girl, Felicity, and a slightly older boy, Harry, where their self-sufficient lifestyle has earned them the admiration and, dare I say, worship, of countless internet followers. They are the Special Ones. The only problem is, they can't leave. They can't even do anything outside of their prescribed roles, because he will punish them if they stray. I won't say much more, in order to avoid spoiling the suspense, but as the story unfolds, we find out the answers to critical questions like why are they there? How did they arrive? And, of course, who is he?

Observations: The Special Ones provides an interesting twist on the stuck-in-a-cult type of story; in fact, it is so much more than simply a cult, but I can't give you any more information than that. The suspense is well crafted here: As the author slowly reveals more and more details about the situation Esther is in, the ominous feeling continues to grow until we find out the true danger that she and her companions are in, and it is just as horrible as our imaginations feared it would be. AND THEN IT GETS WORSE! Of course it does.

There was a disorienting narrator switch well into the book that momentarily had me think, no! I don't want to leave Esther's POV now! But rather than being a book of two halves/two narrators, the switch was to introduce alternating viewpoints between Esther and another character, so ultimately the change of perspective wasn't too much of a jolt.

Conclusion: Overall, this book is a very gripping thriller with lots of psychological tension in the first half that translates into action toward the end of the story. It's also got well-rounded, interesting characters who are developed enough to make us care about what happens to them—a trait that is sometimes missing in more plot-driven suspense stories. The characters add a lot of dimension to this one, which is important in a story that asks WHY people make certain choices, and why they do the inexplicable and sometimes terrifying things that they do.

I received my copy of this book courtesy of my library's ebook collection. You can find THE SPECIAL ONES by Em Bailey at an online e-tailer, or at a real life, independent bookstore near you!
Posted by Sarah Stevenson at 8:00 AM
Labels: AF, Psychological Thriller, Reviews, Suspense