Unlike a lot of other people, I don't actually like time travel novels.

I think the last one I truly liked was a DWJ novel - but others were frustating. Deeply frustrating. If I can go back in time, why can't I FIX things? Why can't I make certain some people are never born, or make new decisions? Okay, okay, I understand about personal paradoxes; I can't prevent things from happening to me or I may gimmick myself out of being. But, to change history? Does a minute's change here or there really matter, like a butterfly flapping its wings and creating a tsunami? Is there really that chaotic of an effect?

Well, I didn't actually think I was reading a time travel novel when I opened Sue MacLeod's NAMESAKE - and then I was like, "Hmm." I was impressed with the characterization and drawn in by some home truths about the character's life, and I didn't realize I was enjoying a time travel novel until it was too late. It was a good thing I didn't give it a pass on general principles, either.

The only objection I have to this thoughtful, intense and quiet novel is the cover. While I like the spatters of sealing wax used to make the title, I've seen those ruddy huge rooks. I've seen their feathers. The feather on the cover of the novel is soft and its quill is gently curved - and it isn't even close to looking like it belongs to a rook - those feathers have straight, hard shafts that don't curve, and no real softness to their look. But - that might just be me.

Reader Gut Reaction: Jane Grey is a high school student, she's Canadian, and she's got a secret. Several secrets, in fact, but the ones that have to do with her parents are lulus. Her father is dead, so at least he has no new secrets. Jane's mother, however, is another story. In Mode One, she is super Mom, the shining heroine of motherhood, the patient, kind woman who calls her "sweetheart" and is the hero of her own play of single widowed motherhood. Sometimes she's in Mode Two, where she ignores Jane... and Jane ignores her, and things roll along fairly peacefully. And then, Mode Three, the one where All Hell Breaks Loose. Her mother is hard-eyed, critical, angry and drunk. Sometimes she's violent, and usually, things end with broken glass, tears, and bruises. Then, it turns into needy, whiny, love-me-love-me-let-make-it-up-to-you. It's a cycle Jane's been on for years, but nobody needs to know what her life is like for real. Not even her best friends, Traci and Megan, one of whom is all into her boyfriend, the other who seems like she's actually starting to ditch Jane for a new bestie. Christina - whose nickname is Christo, since she couldn't remember the Count of Montecristo wasn't actually Montecrisco, is suddenly everywhere, a loud-talkkng, gum-popping nuisance who has taken Megan friend away, just when she needs her... 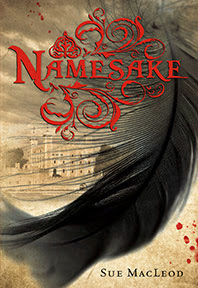 Not that she could have told Megan anything, anyway. Not that sharp-eyed Megan hasn't noticed that something's wrong... and been waiting for Jane to confide... and is losing patience...

All that's left to Jane is school, though these days, since she didn't make the cut for a lot of her AP classes, she's not even into it that much. Only AP history, where her project on Jane Grey, the Tudor queen, has any interest for her. She somehow finds a tiny prayerbook - beautifully tooled, incredibly old - and when she reads a psalm aloud finds herself suddenly leaping across time and space to stand before the owner of that book - Jane Grey, the nine day queen. Believer in the True Faith, and for her sin of heresy, at least in her cousin Mary's eyes, doomed to die.

Jane never wanted the throne, never wanted to marry that corpulent man. Beaten into submission by her power-mad father, used for everyone's political ends, Jane lives out the last of her days in the Tower of London, where the modern Jane, her namesake, finds her. Two girls, finding solace in each other, and refuge from the harsh realities of life. Lady Jane is saving Modern Jane's sanity. Can she do anything for her in return? Maybe she's supposed to ...save her?

WARNING: The Butterfly Effect is real, for a given value of reality. Time travel portals can be anywhere. It is hazardous to read while operating heavy machinery. You cannot have time in a bottle, nor make wishes come true. Your mileage may vary.


You can find NAMESAKE by Sue MacLeod online, or at an independent bookstore near you!

Hello Finding Wonderland. I love this review of Namesake - I can relate entirely to loving this book in spite of disliking most time travel. One thing: would it be possible to correct the title of the post (which calls the book "The Namesake" instead of "Namesake") to avoid confusing among any readers who want to look it up? There is another book called The Namesake so confusion is very possible.

@ Erin~ Oops, oops, oops, mea culpa! Thanks for coming by and correcting me! And, it is an awesome book, hope you'll grab a copy!

Ooh, interesting. I have mixed feelings about time travel books myself. There are some I ADORE and then there are some that just don't work for me. I'll be interested to check this out.