Finding a novel titled, "Texas Gothic" in a library in downtown Glasgow made me snicker. As we're all about the boot-scootin' boogie here in Scotland (No, seriously. People love The Man in Black here. It's kind of scary), I had to race and throw myself down on this one bodily before someone else snatched it.

It was so worth the elbow rug-burn.

Reader Gut Reaction: This book cracked me up. When I finished it, I started again. What (aside from its awesome Texas-ness) made is so eminently readable? The pace - is quick, quick, the heroine is full of snarky goodness. Things happen - funny things - one on top of the other. There's a goofy sister, itchy-butted cows, Victoria Secret lingerie and boots, and banter with a really cute cowboy, all within the first ten pages or so.

Concerning Character: Amy Goodnight is... compartmentalized. On one side of the line, is her whacked-out family - her socially clueless but charmed sister, Phin, her abrasive cousin Daisy, her hard to find (REALLY hard to find) Uncle Burt, kind, bossy, and slightly dotty Aunts Hyacinth, Iris, and all the rest -- and on the other side is sanity, sweet sanity. It would be nice if we could all put our families and their shenanigans on one side, and school, life, and everything else on the other... it would be nicer still if it would work. Normally, it works better than this, but Amy - whose real name is Amaryllis - has landed in the thick of crazy this time, and it seems there's no way out. She and her sister, Phin -- Delphinium - are house-goat-and-garden sitting for their herbwitch aunt, and it seems that the neighbors have a ghost. Who better than Phin to take her mad scientist medium skills down to the neighboring ranch and see what the ghost wants?

And who better than Amy to run afoul of the hottie neighbor -- in her underwear -- and come across as Crazy Public Enemy #1? 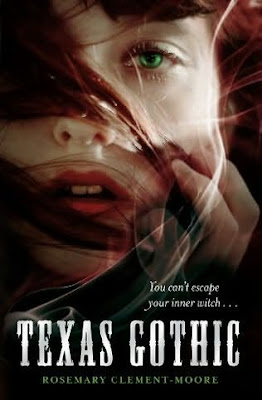 Recommended for Fans Of...: books with fully rounded minor characters, a charming girl-meets-boy-hates-boy-immediately storyline, wonderful and loving families, who drive each other bug nuts, and did I mention romance... if you enjoyed Once A Witch/Always A Witch, by Carolyn MacCullough, or the Paranormalcy series - with snarky and strong female characters, you'll enjoy this.

Cover Chatter: Now, it's clear I love this book, but for me, the cover is a Great Big Fail. Amaryllis Goodnight is so much bigger a character than what's shown on the page. Just hair and eyes? No, our girl is mucking out boots, feeding goats, and oh, the odd finding and speaking to ghosts. In Spanish, yo. Hair and eyes don't begin to cover it. Not that the cover isn't pretty, but it's not Amy. Honestly, the whole of the Goodnight clan is so strongly realized that I think the author could revisit them repeatedly, and not wear us out -- so we need a cover that lives up to that.

Authorial Asides: Rosemary Clement-Moore is fast becoming one of my favorite YA authors. Her novels are perfect for older teens who prefer novels which deal with family relationships and personal growth, rather than high school drama. The romantic aspects are pretty intense and realistic, and yet you won't find parents complaining about her. (How does she do that?) If you haven't read The Splendor Falls or any other of Clement-Moore's novels (the Maggie Quinn: Girl vs. Evil series is cute), do check them out.

You can find the funny and surprising TEXAS GOTHIC at an independent bookstore near you!
Posted by tanita✿davis at 11:47 AM
Labels: Cybils, Fantasy/Sci-Fi, Reviews, Romance, Sisters

My roommate LOVED this book, so I put it at the top of one of my Cybils to-read piles.

I've read two other books by her and really enjoyed them both! I'll definitely look for this one. And, I agree--that is not a particularly exciting cover.

OK, just finished reading this one and, again, I LOVED it. I'm with you--I really, really like her writing. It's funny but not flip, and the strong, sassy female characters are all wonderful. And it doesn't talk down to readers, either. I just kind of loved everything about this one.

Yeah, pretty well sign me up for anything she writes... that's officially my definition of FANGIRL.